It is the last hour of your life, and you feel regret. Stuck in a dead-end, out of ammunition and weak from exhaustion, you wait for death to find you. It won’t be long; you can already hear the telltale scraping of its footsteps. The night started promising: a new food source had been found that could sustain your meager group of survivors for another month. The going was dangerous, but then again, when was it not? Now–after watching Beth fall to her death in a badly timed jump, and seeing Jason torn to shreds by the ravenous monsters–you turn to face your own demise.

The horde has grown since you last dared steal a glance. A full twenty zombies bear down on you, their faces blank and their eyes vacant. They don’t hate you, not like you hate them. You aren’t even food they need; they can’t digest with decayed stomachs. As their hands take hold of your clothing, you make a promise not to scream, not to give in to your fear or to the coming pain. When the first mouth finds its way to your neck, however, your cries echo throughout the rooftops of this city of the dead.

Zombicide is the cooperative mini-based board game that busted all kinds of records over at Kickstarter.  You and your friends play as a group of six survivors as they try to survive, kill zombies, and complete mission objectives in a nightmarish post-apocalyptic zombie infested hellscape. 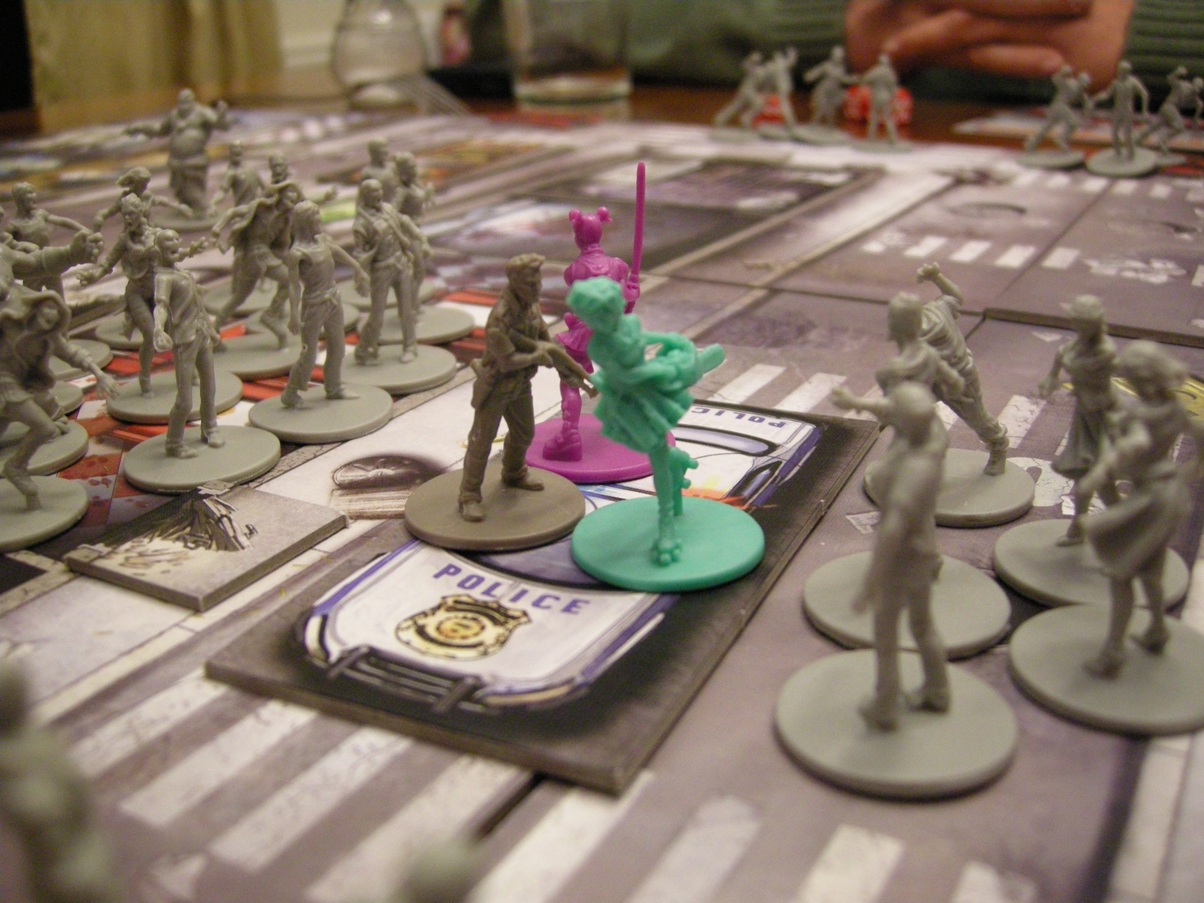 They’re coming to get you, Barbara

So, pretty much exactly the kind of game you’d want to play when you need to relax with some mindless mini on mini violence.

The basic game contains nine double-sided board tokens to assemble into dozens of maps, a crap-ton of zombie figures and six color-coded survivor figures as well as the assorted chits, spawn points indicators, search cards, and other bits of cardboard and plastic needed to play the game.

As a character (or characters depending) you can take three actions a round: attack, move a zone, or search. Game controlled Zombies spawn randomly and can move or attack.  Basic zombies get one action a round; runners get two.  Most of the time, the goal for the survivors (like all good zombie stories) is not to kill zombies: there’s too many of them.  The goal is to get in and out with a minimum of fuss.

You will fail in this every time.

Unless you play as Batman. Dude’s got, like, +15 to Sneak

Zombies move toward survivors they can see, or toward the noisiest zone they can’t (you make noise by using noisy weapons, breaking open doors, or just generally existing).  They spawn (or get extra activations) at the end of every round, and they spawn more frequently the more zombies are killed.  Managing noise, stress, and making sure the survivors are being more egalitarian with the zombie kills adds a lot of tactical decision making to the mayhem.

Most importantly, it’s a ton of fun. 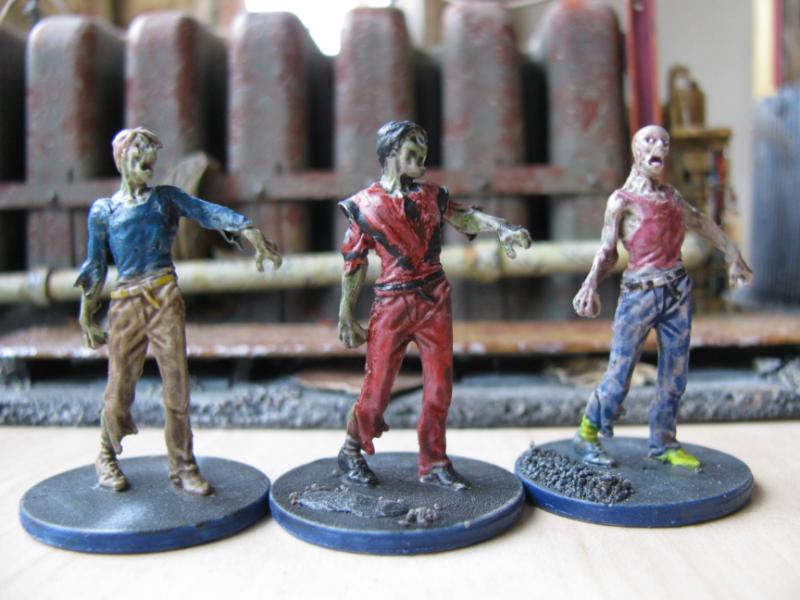 You might get carried away during the “Thriller” mission

But here’s the thing about Zombicide: The more prepared you feel, the less safe you become.

As you level in the game and find new weapons, you might be lured false sense of security.  “I’m a red (5th) level survivor with a chainsaw and dual smgs: I am the God of undead redeath!” And indeed you will be, for a moment. 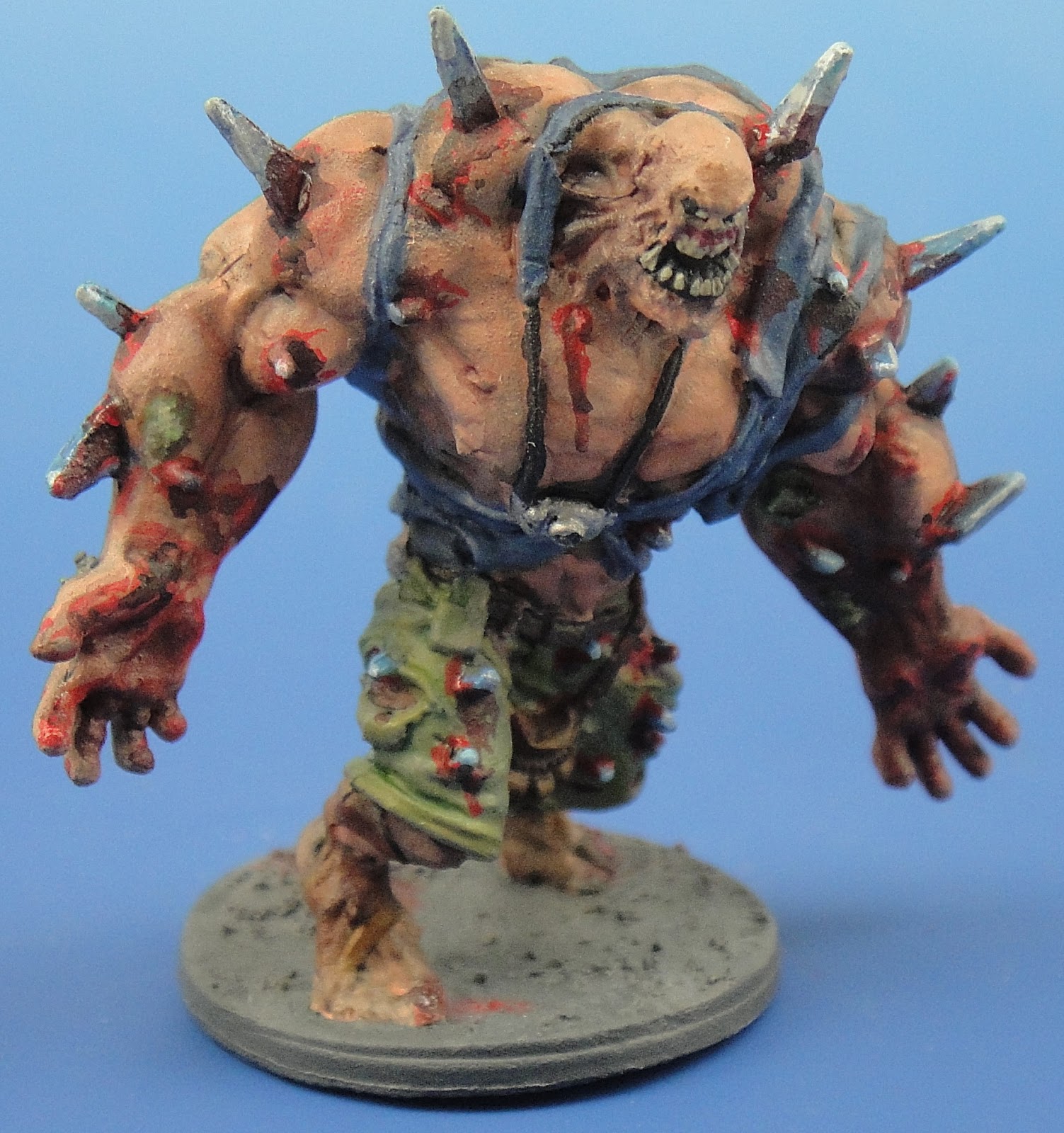 Luckily, Abominations just want to hug your face…with their teeth

Zombies are avoidable and defeatable until they aren’t, like when ten walkers spawn from the manhole you’re standing on and get an extra activation.  Then you and your friends are going down, wishing you had used your brains just a little more, and managed to keep them in your heads.

The odds are certainly never in your favor

I personally have ridden this overconfidence, waltzing about with my chainsaw within easy view of a horde; so sure that I could deal with them.  Until the wrong card came up, and “just a couple of walkers” chewed my poor beloved Josh to death and I had to face the fact that I had failed my teammates.

On the flip side, I’ve had my survivors huddled in the back corner of an office building, desperately searching for Moltov Cocktail components as the Abomination (aka the nearly unbeatable Zombie Tank) moved closer, one room at a time; biting my nails and hoping the right search card will be flipped in time.

But remember one thing above all: it only takes one Zombie to bring you down. Slow as they are, Zombies don’t miss.  And two hits and you’re dead. We lost a game early when one of our survivors missed two easy hits against a runner (note: when your win condition includes every survivor living up to their namesake it pays to play conservatively, in a thundering herd where you can divy up all the Zombie wounds according to communist, egalitarian principles) and we lost two full-health survivors in a disastrous single round but we had a blast doing it.

Losing happens, but the game captures that most essential feature of the Zombie genre: that anyone can die at any time.  Which only makes it all the more satisfying.

The rules are simple enough, the Zombies are predictable enough that you will never feel as though the game is ‘unfair’ but randomized sufficiently that you won’t be bored.  So, fun as it is to tear through a lumbering horde with your chainsaw, you really should be thinking about what you’re doing.  The mix of mechanics works (and all the little touches) work well together to make a thoroughly enjoyable game. Don’t worry about the chainsaw…I got this

Additionally, Zombicide’s replayability is great, not least because Guillotine Games has released extra survivors, scenarios, and options for the base game (not to mention a couple expansions, another Kickstarter busting sequel, and enough extra custom minis to delight every manner of geek).

Beyond the game, the minis themselves are intricate and interesting with enough variety to the models to keep things visually fresh.  If you’re into painting figures, Zombicide will keep you busy for a while. My only quibbles are that Runners can be confused for the Walkers (the main difference between the models being a slight tilt). I highly recommend picking up the game when you get the chance.  Zombie smashing tactical fun awaits.

Oh and my advice?  Follow horror movie 101: Don’t split up, be careful how you search; and when your guns aren’t doing the job, stop wasting your shots.