War is hell, as the saying goes. For thousands of years, men and women have taken to abysmal battlefields for country, king, and revolution. Heroes were forged in the fires of combat, rising to glory on the backs of their slain foes, or falling into legend under a hail of arrows.

Brace yourself: War is coming.

Shake off those headsets and stock up on Red Bull, a new Call of Duty is on the way. Forget, for a moment, the weeping sore that was Ghosts and remember the unbridled madness that was the original Modern Warfare. For those of you below the voting age, let me take you back to 2007. First Person Shooters were all the rage, as they are today, but there was not much in the way of variety. In fact, if you wanted to play an FPS, you really only had two choices: Alien/Monster gore-fest, or World War II.

Sure, there were the odd Delta Force games, but those were incredible bland. Gamers preferred their battles on the rainy shores of Normandy, or the intense skirmishes in the Ardennes. But after years of the same fights in the same mud, that tune started to change. And one developer saw an opportunity to change the way we fight our digital wars.

This is what passed for graphics back then…wait, WTF happened to his hand?

Call of Duty: Modern Warfare was a revolution, and not just in gameplay. Aside from the graphics, the weapons and the setting, the main draw of the game turned out to be story. The West was fighting a war against a new kind of enemy (no, I’m not inviting you for political debate, so leave this alone). This wasn’t WWII with the easy-to-hate Nazis. This was war against terrorists, many who fought outside their home country. This was a war of ideals, which did not easily translate into gaming format.

Infinite Ward answered the call will a game that still casts a shadow over the rest of the industry. Firefights felt real and anxious, the sound design inspired a new form of PTSD, and the moral compass spun wildly in all directions. The choices you made in the heat of battle were even more intense because you did not know if they were morally just! 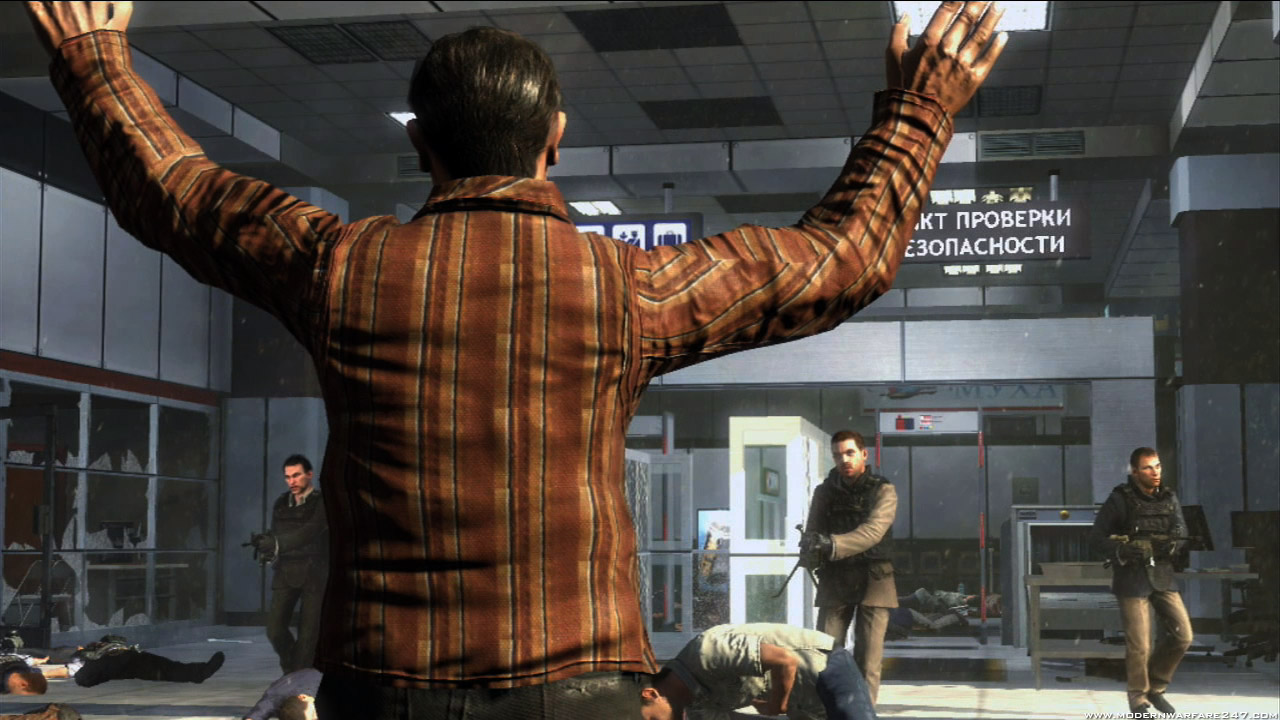 If you didn’t blink during this scene, you might just be a terrorist

In the more recent titles, Black Ops and Modern Warfare 3, you actually made life and death choices that affected more than just the members of your team. Heck, in Modern Warfare 2, you explode a nuke over America in order to halt an invading Russian army, killing thousands of civilians. Holy shit, that’s some goddamn drama! And it’s about to get crazy all over again. Announced only a few weeks ago, Call of Duty: Advanced Warfare has all the makings of an epic shooter. It has a new(ish) setting, incredible visuals, and the best FPS design team ever assembled. But is this black op worth the clearance, or should it burned before reading?