The wait is over. What has been touted as the “big”game of the next generation consoles is here: Ubisoft’s newest franchise, Watch Dogs.

After a delayed launch of six months, Ubisoft promised to bring gameplay mechanics and the city of Chicago to their full potential and spared no expense to achieve this goal. Using a brand new engine and bringing the best of their internal development teams to work, Ubisoft made a lot of promises to the gaming community.  Does Watch Dogs create a harmony of coding genius or fail to find its identity in a genre ruled by the Grand Theft Auto?

Chicago has become an Orwellian nightmare: A police state mentality controlled by evil corporate overlords with citizens under constant surveillance, the entire city running off a connected operating system. As computer hacker and self-righteous mass murderer Aidan Pearce, you must manipulate and hack your way to the top of a grand conspiracy. It’s a strong social commentary, reflecting real-world fears of today’s surveillance state.

Aidan’s vendetta stems from the loss of his niece in attempted hit on Aidan’s life after he angers the wrong people.  After a year passes, Aidan follows a trail of bread crumbs to find those responsible for his niece’s murder and instead finds himself dealing with Chicago’s corrupt elites and the heads of its seedy underworld.

The story of Watch Dogs is a slow burn that quickly finds itself lost and convoluted.  Aidan is out to avenge his niece, but that thread is dismissed as Aidan delves into human trafficking, mob bosses, evil corporations, and gang warfare. None it seems to gel with the original tone and plot, but it does introduce you to an interesting cast of anti-heroes and villains, all of whom are much more flushed out than the drab and boring protagonist. Aidan comes across as an anti-social, emotionless piece of chalk that you use to simply draw lines from one point of the story to the next. 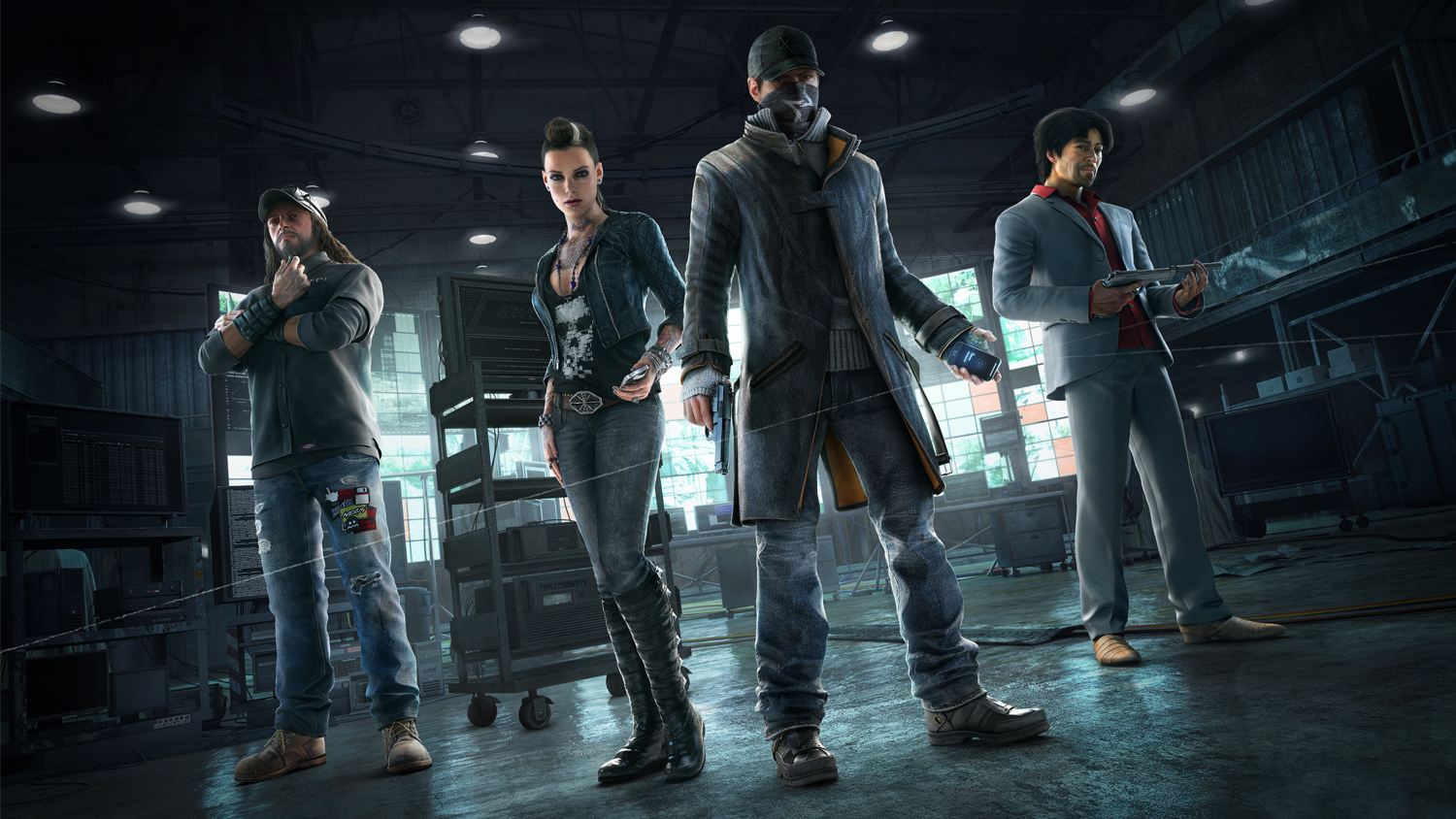 One of the biggest shortcomings is the city of Chicago.  Ubisoft sent teams of people to the Windy City to research the vibe and structure of the famous location, but the only part they got down was the fact that there is an elevated train. As a resident of Chicago, I may be a bit biased, but to claim that they had captured the “heart of the city” is a massive overstatement. The downtown area itself looks similar to what you may expect or know, but the outlying areas are lacking any of the density of the residential neighborhoods and their thriving nightlife. The strangest addition of the surrounding world are the mountains. Chicago is flat, really flat.  Watch Dogs‘ Chicago is huge, granted, but considering this a next gen open-world game, the fiction is far from the reality. The city is scattered with mundane and recycled side quests that didn’t keep my interest for more than a few plays. Because Watch Dogs is also on the previous consoles, they may have had to scale back in some of the assets and city sprawl Chicago is known for. When comparing what was achieved in Rockstars Grand Theft Auto V, Watch Dogs is compact, lifeless, and empty. 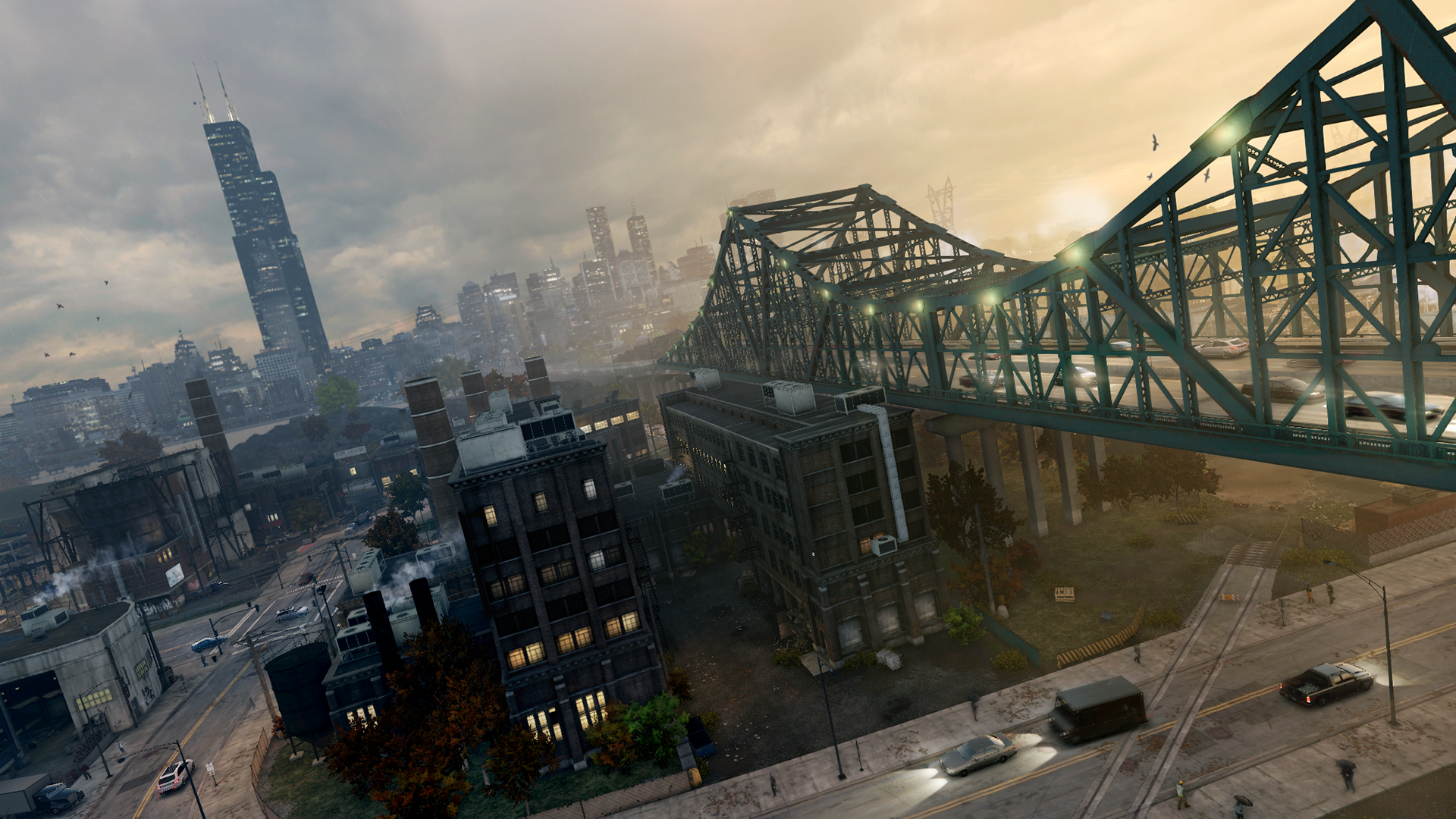 The hacking of Watch Dogs boils down to a few in-game objects and scenarios that present themselves in the world as “hackable.”  It should be cool and sleek to pull off an awesome jump over a raising bridge and leave the cops in the dust, but it doesn’t feel all too amazing or powerful, and it never quite works how you imagine. I was hoping for more of a Blues Brothers style, with car pile-ups as cops pursue you over a bridge and land one atop the other like so many matchbox cars.  This never happened.  As for the profiling and stealing money from locals, I never saw myself needing the money, and a lot of the profiling seemed to just point out off-putting personal details like “frequently web searches rape.”

Clearing out a gang hideout or taking on a criminal convoy can be fun, but when the entire game is comprised of the exact same events in both the side quests and as the main story missions, the repetition takes its toll.  Most of the quests that progress you through the story follow one specific formula: go to a location, hack and kill all enemies in the designated area, hack a console, flee from pursuing assailants. That is the entire game. There are some neat privacy invasion side bits where you can hack into a camera in a person’s home and observe brief vignettes, but most seem brash and purposefully offensive. It all felt a little too dialed-in to try and show gamers “look, we understand the internet culture,” when in actuality their concept of the future seems to be outdated instead of innovative. Why is Aidan still using his phone to hack things? Why doesn’t he have a google glass type apparatus? That certainly would have helped make him seem more human. .

This isn’t to say the game is bad, but it just doesn’t create a new space for itself. Watch Dogs falls victim to the same old tropes already set in place by its predecessors in the genre.  As I continued playing, the gameplay seemed to come together more.  I started to have more fun as I learned new hacking abilities such as blowing up a steam pipe under the street and sending pursuer’s vehicles through the air and hurdling into onlookers.  The car physics are loose and take a little getting used to, but once you get a grip on the drifting and slack turn radius, it can be pretty fun dipping in and out of alleyways and maneuvering through a hacked intersection.

The gunplay feels visceral and tight: Shooting an enemy in the head with your silenced pistol has a great stopping power and satisfying “popping” sound.  There is a quick auto aim functionality which is par for the course these days, but it doesn’t take away from the frantic gunfights that inevitably occur after you have been spotted. Action is never forced and you can stealth your way through every scenario with relative ease.  Creating diversions, leaping from camera to camera, and setting off environmental hazards can be satisfying, but it becomes a chore after doing this for 20 plus hours without much change in procedure.

The online components make for some interesting interactions based on invasions of your world by other players online.  Players will try to steal your data through a timed download within an enclosed area of effect.  It’s a hide and seek style mode that can turn into cat and mouse pretty quickly.  Hiding in plain sight and trying to elude the player you are hacking can be pretty enthralling. Early into playing, I would receive a prompt that I was being invaded every day. These have all but disappeared over time. I was not seeking it out, because I was accustomed to players seeking me out, but now it seems as though the community is not proactively participating in these experiences as much as when the game released. I am sure that if you look for online interactions, you will find them, but that seems to be missing the point Ubisoft was trying to make by creating their seamless drop in multiplayer suite for Watch Dogs.

There is a lot to do in Watch Dogs, but it seems more like quantity over quality. I spent a good deal of time swinging between frustration and excitement; From the terrible mission checkpoint systems to the lifeless city of Chicago to feeling the pure joy of setting off an explosive device attached to an unsuspecting mercenary. With unbalanced emotions in the characters and story structure alongside disjointed mechanics and an underwhelming hacking ability, Watch Dogs leaves a lot of unfulfilled promises. It still offers a fun sandbox to toil away in for many hours, but those without patience may be left wanting. Watch Dogs is far from the next gen’s “killer app.”

For a title that aims to show us the future, Watch Dogs as a whole feels rather outdated in comparison to other titles in the open world genre, even in comparison to Uboisoft’s own Assassin’s Creed titles.  Much like the original AC, it is conceptually a great idea, and much like Assassin’s Creed 2, completely iterating and building on these concepts.  I expect Watch Dogs 2 will completely reshape the open world genre for the future, until Grand Theft Auto 6 comes out, of course.