On a routine patrol, you look down on the streets of the city.  Solomon Grundy is rampaging through downtown, and reports are coming in through your earpiece that the Riddler is hacking the stock exchange.  But maybe the villains need to wait: you still need to reach out to Green Arrow about joining your team, optimize the bat-mobile, and work on mastering the magics of Aquaman’s trident.  You use super-speed to accomplish more than you’d ordinarily be able to, blast Solomon Grundy with heatvision and cow the Riddler into submission with the mere presence of Cape and Cowl.  An earlier battle left you weakened, so you pause to take a breath before you convince Green Arrow to join your cause with an impressive display of your super strength.

But still, you know Braniac and his cabal is somewhere, pulling the strings of everything you see.  But you can’t do it all at once, can’t be everywhere at once; so you prepare for the next moment and whatever new horrors will be unleashed by the villains.  And then your team-mate, your competitor, goes to work.

In the DC Deck-building Game, you takes the role of one of DC Comic’s most Popular Heroes (Wonder Woman, Superman, Batman, Green Lantern, The Flash, Aquaman), all of whom subtly modify how the player’s deck works. While you begin armed only with basic punches and crippling vulnerabilities as the game progresses you add new, more powerful cards to your deck until either 1) all the supervillians are defeated or 2) the main deck runs out.

Or someone tries pretending that Aquaman is a relevant superhero, and the group laughs themselves to death

Each player starts with their own basic 10 card deck and draws a hand of five cards each turn. Power is the currency you will use to buy new, stronger cards to add to your deck while victory points are what decide the game. The goal of a deck-building game is to craft your personal deck into well-oiled machine, where each hand gives you high power to acquire great cards, attacks to cripple your opponent’s deck, or defenses to fend off your aggressive opponents and the appearance of random supervillains. There are five different types of cards that can be acquired: Villains, Heroes, Equipment, Super Powers, and Locations. Negative Value Weaknesses are gained I’d like to play “I’m Batman” for a billion hit points, please

A large, central stack of cards (the Main Deck) supplies a five-card “Line-Up” from which you purchase new cards. Each player will always have five cards (plus the always available ‘kick’ and ‘supervillian’ stacks) to choose from each turn, so every turn there are new options and new surprises.  When a player has amassed enough Power, they may attempt to defeat the current Supervillain. In the end, the player who has accumulated the most Victory Points from the cards in his or her deck wins the game. 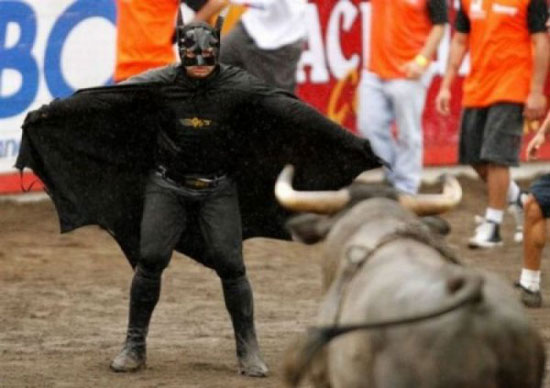 Deck based games are great because they incorporate strategy with enough randomization to keep you guessing. Perhaps more importantly, you can’t pre-decide on a strategy as you never know what will be flipped over from the main deck (or rather you can, sort of, but when the cornerstones to your plan don’t get flipped you’re SOL).  While it’s possible to win without purchasing super-villians, it’s probably a strategy that won’t work out most of the time: with very few exceptions super-villians are almost always worth more victory points than nonsupervillian cards (because what are supervillians about -really- if it’s not defeating equally colorful and carnival attired enemies?)

It’s lightly malicious fun spoiling your opponents’ strategies, like buying all the villain cards so that your Wonderwoman opponent (who gets a bonus from defeating villians) can’t use them.  And games get hot pretty easily.

One of the weaknesses of the game is the lack of diversity in the cards (although that might actually be a product of me overplaying the game).  The game proudly claims it is built off the cerebus engine and is compatible with other Cerebus engine games (which is scheduled to include the Capcom Deck Building Game, The Naruto Shippuden Deck, and the ‘Heroes Unite’ DC Deck Building Game) but would benefit from an expansion already.

The three Deck Building games I have to compare it to are Ascension, Marvel: Legendary, and Thunderstone: Numenera.  It seems to lack the chaining complexity of either (although, admittedly, I only played that game once) but what it lacks it make up for in being exoteric (unlike the word exoteric itself).

There are also alternate rule-sets to provide enhanced variety to the game.

All in all, I’d highly recommend this as superheroic fun for you and your friends.