It is the night of the hunt.  No one leaves their home.  No one opens their door.  Roving bands of madmen take to the streets, sick with tainted blood. They believe that they will stop the poison that courses through the streets turning men to beasts. They seem lost, listless, and confused. Are they themselves the beasts they hunt, or is there something more sinister at play? This night, this hunt is different, otherworldly. As if the fabric of this world is but constructed from a dream.  A foreigner arrives, a harbinger of an end to the nightmare. 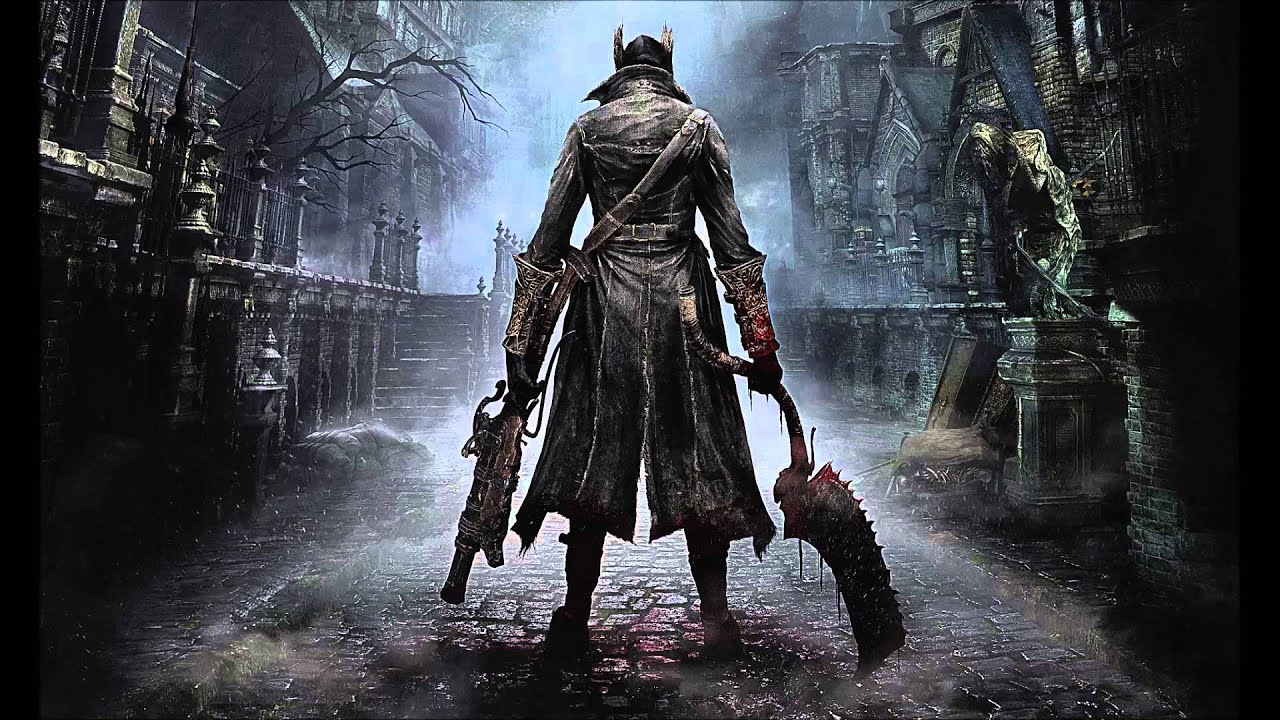 Ever since the release of From Software’s 2010 cult hit, Demon’s Souls, it seems that the third-person action adventure genre has been trying to tap into their successful formula.  Dark Souls and Dark Souls Two solidified the series into a genre of its own and has become a phenomenon with a diehard fan base.  Bloodborne, is the fourth title released in the “souls” genre, and its brutal and unforgiving nature lives up to its forebears. It continues to evolve the gameplay and mythos of the worlds From Software has created.  The city of Yharnam tells a story all its own, a grim world full dark secrets and dangerous monsters bound in blood.

Yharnam is more than just a town plagued by beasts and horrific apparitions. It is a living breathing world.  The city sprawls in an endless stretch of towers that seem to reach skyward, greeting the pale blood moon above.  The streets are brimming with gothic architecture and ghastly statues haunting each alleyway.  Between Yharnam and the Hunter’s Dream, you will be blanketed in many tricks and tribulations.  The Hunter’s Dream is a hub world where shops, weapon upgrades, and stat upgrades are acquired from a most mysterious Doll.  The Doll is a haunting and distant spectral that applies certain knowledge of the world around her in cryptic messages and conversation.  There is much to uncover in both Yharnam and the Hunter’s Dream.

To discover what lies behind the fall of Yharnam, you must delve deep into the nuance of each and every character and setting you come upon.  It is a mysterious world, and that is completely intentional in design.  Every encounter you have, each boss battle, each new area you unlock reveals more and more about what the hunt is, the importance of blood, and where the hunter fits into the madness.  It is as if the player is not just a hunter, but a detective, solving the riddle that is the world of Bloodborne.

Combat is not easily perfected in Bloodborne, it is a skill learned through patience and precision.  Each new enemy has its own set of attacks to learn and exploit with well-timed strikes or a quick parry.  The parry mechanic has been turned upside down from what returning “souls” players may be used to.  Shields are a thing of the past, the future is in black powder and firearms.  Without shields as a viable strategy, the hunter must adapt to a twitch based reflex shot from the new pistol mechanic. The pistol is a crucial weapon to the hunter, and without shields, the game creates a more frantic and offensive style to how the player views and succeeds in combat.  When damage is taken, there is a small window to quickly retaliate and by doing damage back, some health can be returned to the player.  Just don’t get cocky, and always stay focused.  Play it safe. Get a well-timed shot off with the pistol and an enemy will become staggered and vulnerable to a visceral attack.  The visceral attack devastates enemies and later can be utilized in such a way to gain back bullets, or replenish lost health through runes.

Runes are discovered all over the world of Bloodborne, sometimes down hidden paths, on Non-playable characters, and even bosses.  Runes add beneficial buffs to suit each hunter’s play style.  There are multiple ways to buff and build the character you desire.  Along with runes, there are gem slots on each weapon, where you can raise stats or add effects to your favorite sidearm or mainland bruiser.  Almost everything in Bloodborne relies on the currency of blood echoes, rewarded to players for defeating any foe.  This governs your stats, the ability to pay for weapon upgrades, shop items, just about everything.  If you die, all the blood echoes you have on you are trapped at the location of your corpse.  Sometimes the echoes are in a pool of blood you can simply return to and recollect. Sometimes a nearby enemy may absorb them and must be defeated to regain the echoes lost.  Die again without collecting them, and they are lost forever.

Although the blood echoes are fleeting, there are ways to gain large amounts without the threat of losing them.  Cooperative play allows for up to three other players to join you in your world and help you continue on your journey.  The cooperators will continue forward with you until either you die, they die, or the boss of the area has been successfully slain.  However, do not become reliant on this mechanic as it can take away from the experience and satisfaction of being able to do it on your own.

The real gem of cooperative play is that if you choose to be summoned into another’s world, you do not have to fear death.  If you die in a world you have been summoned to, your echoes stay intact even after death.  This is a great way to enter a new area and practice defeating bosses you yourself have not faced.  The issue with summoning players into your world, is that this opens up the chance of being invaded by a player that may not be so friendly.

Invading and killing other players in their world is still very much alive and well, but it seems to have become a bit more difficult for those invading.  If a hunter rings the bell for cooperators to enter their world and helm them defeat the boss, a mysterious woman will appear somewhere in the area and ring a “sinister bell”.  This bell allows for invaders in the area to be summoned into the players world.  If this woman is killed before an invader can enter, then the threat of invasion is gone, and you and your merry band of hunters may continue unabated.  Should the invader succeed in entering your world, the odds will certainly be stacked against them if cooperators fact that they may invade a player’s game where he has two other cooperators present.  Now heed your bell as well.  However, those who relish in these encounters know how to build the perfect hunter of hunter killing machines, so beware.

There are, of course, hangups with a game like this outside of the difficulty and obtuse nature of the world.  Bloodborne, at times, can seem to not know where to improve on the difficulty. Late in the game, a very annoying and infuriating section uses a mechanic called frenzy in a way that cheapens the whole section by relying on an unavoidable affliction. The camera may also be the worst enemy in the entire game, as it always seems to freak out the most during the most harrowing parts of boss battles.  It may be due to a miscommunication between the target lock and narrow environments, or the dodge moving the target lock out of line of sight and it snapping back to basic camera controls. Regardless, it has certainly caused many deaths.  These are all relatively small gripes that can be worked around.  If a section seems unfair, be unfair to it.  Go ahead and use your Threaded Cane in whip form and hit enemies through walls. No one is watching.

Bloodborne isn’t just about dying and failing. It is about the world, the lore, and the mystery that lie behind every door.  It is about the online communities that form around each one of the “souls” games releases.  Bloodborne brings a hearkening back to those days before the internet became a household commodity. It reminds me of those bygone days in the school yard, talking and discovering new tactics or possible paths you may have missed that someone else has found.  The community works together to dissect, empower, and understand just what Bloodborne is in both a meta and literal understanding of its design.

Bloodborne, is not for everyone. It is an intense and nerve fraying experience that requires patience and understanding.  It takes time to get a grasp on the mechanics behind each timed swing of your weapon, and to study each and every enemy’s tactics and exploitable windows.  This isn’t to scare players away. Bloodborne should be tried and given a fair chance.  If and when it clicks, Bloodborne becomes an addictive and satisfying challenge wrought with an incessant drive to eradicate the beasts of Yharnam.

(Hopefully, this was enough to at least pique the interest of the readers.  With a game like Bloodborne, an in-depth look is for the player to discover, not for the review to breakdown.  There is so much I won’t touch on or even mention because I know the importance of experiencing it for ones self.  The lore, the weapons, and the secrets of Bloodborne is a discussion one must have or observe in the online communities, but I implore you to seek it out for yourself before relying on others.  Pro-tip: always read the FULL item description.)