A ship would bring you work, a gun would help you keep it. A captain’s goal was simple: find a crew, find a job, keep flying

I am a Browncoat, and I am proud of that moniker. No, I did not fight in the Unification War, nor did I spill Purple Belly blood on the sands of Charon, Londonium or Persephone. But in my own way, where I can, I honor those brave Independents who gave their lives for the just cause of freedom.

More accurately, though, I am a rabid fan of Joss Whedon’s cult hit Firefly. 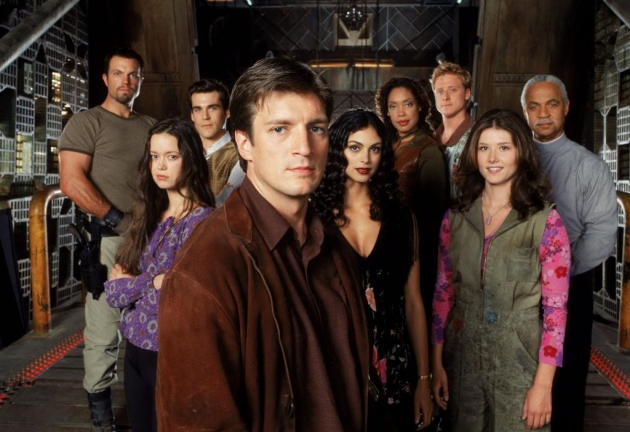 Best-looking cast on TV? I think so

If you don’t know the show, then please leave. I simply do not have time for you. Go read up on some MLP fan-fic and try not to burn yourself on that Lean-Pocket you’ve been cooking up for dinner. For those of you in the know, Firefly was more than just a TV show cancelled before its time. It was a revolution in storytelling and the birthplace of some of our favorite Big Damn Heroes.

Years have passed since the show, the movie, and even the comics. Now, for the first time, Firefly is headed to my favorite medium.

First and foremost, it’s about damn time. I am only one of many voices that has called for this game since I first discovered the show back in 2006 (I missed the original airing by 3 years, but caught an episode on HOT SciFi in Israel of all places). The universe–or Verse–was so richly developed by Whedon and his writing team that it just begged to be explored. Even if the show had run its intended seven seasons, there is no telling just how many worlds would go untouched.

Now let’s go ahead and say it: This will not be the next Mass Effect. Quantum Mechanix, the dream team behind the project, does not have the experience of EA or the pedigree of Bioware. What they do have is a love and respect for the source material that is evident by the effort already put in. The entire cast of the show, including the crew and several fan favorite characters, will be reprising their voices for the game. While you won’t be able to play as Mal or Shepherd Book, you will be able to interact with them on various missions.

Joss Whedon hasn’t signed on to write any new storylines, but he has given his blessing to this production, and Joss is VERY protective when it comes to his children.

So how is this game going to work?

You will start by creating your very own captain. There’s no Alliance or Reaver options just yet, but you can be sure there are plenty of choices when it comes to making your new shiny avatar. Once you’re satisfied with the results, you’ll need to get a ship and a crew. Most of the adventures happen on Jobs–or Quests, for you RPG fans. You’ll earn money, experience, and the ability to outfit your crew with new loot and weaponry. You’ll also need to keep your ship in repair and fueled, otherwise you might find yourself adrift in the Verse.

Jobs aren’t just random noise until the shooting starts. According to the developers, players who want a more cerebral approach will find that combat is only a necessity when it’s dictated by the other side. You can savvy your way through the game without drawing iron but a few times. When firearms do come into play, the game shifts to a turn-based strategy. We can expect perma-death to be a serious issue for tight-knit crews.

And you’ll want to keep your people happy. Not all crew members are created equal. Some want to be bad guys, otherwise just want to survive on the raggedy edge. You’ll need to balance how you treat all of them if you hope to keep them on board. If someone does leave, they retain all of their experience and gear, and can then be picked up by another play willing to pay. If you left on sorry terms, that merc may offer their new captain a few platinum to go hunting for your boat.

As for boats, QM promises that not only will your ship be customizable, it will render that way during cut scenes. So you’ll be able to see the fuzzy dice logo painted on the side of your Knorr-Class freighter. Newer engines will get you places faster, better armor will keep you safe from Reavers, and new parts won’t break quite so quickly.

There are still plenty of questions remaining about the game, such as “When does it come out?” Right now, QM is planning on a Summer 2014 release. Seeing as it is August already, that may well get pushed a few seasons back. Not to worry, though, because this team is working hard to get the game into your hands before Unification Day. Or Christmas. Whichever comes first.

In any case, I will have to try and contain my excitement until I get a chance to give you a full review down the road.