Walking down the hallway toward the bathroom, I hear it. The soft, unmistakable sound of a baby crying. It wails pitifully, braying like a dying animal. Normally I would run to her crib, place my hand on her head, and calm her back to sleep. But I don’t now…because she’s been dead for almost a month. I pause at the corner, willing myself to turn toward the entrance to my home. My heart beats faster, rising up toward my throat, as my feet take the final step.

[Editor’s Note: With the recent cancellation of the Silent Hills project, let’s take a moment to remember what could have been.]

With Gamescom happening in Germany this week, there was one announcement that came in the form of an interactive trailer. The short scene was a fully playable and realized demo of a horror game–free to download on the Playstation Network–known only as P.T.  Curious, I waited for sunset and prepared myself for what I expected to be a 20 minute demo showing off some new title, probably following the path many modern horror titles have already taken.  What I found was nothing short of the most horrifying, entrancing, and nail biting 3 hours of my life. And that demo only scratched the surface of what was hidden within the game itself. 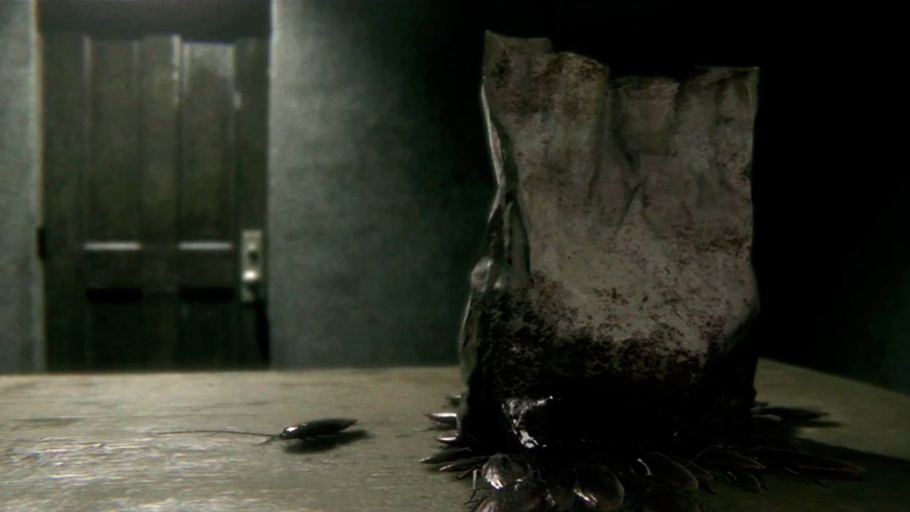 P.T. is dark, brooding, and anxious dread.  I love horror games. I feed off the adrenaline and close encounters, but at points I simply couldn’t move. I was so frozen with fear, I would find myself standing still in the center of a corridor unable to bring myself forward into the madness. This was an altogether new feeling. I’ve marched headfirst into swarms of Necromorphs, waded in a sea of zombies, and curb-stomped demons. But a not-so-empty house? That froze my blood.

It should go without saying, but this game is gorgeous. Almost photorealistic

The game opens with me lying face down on cement floor in an empty room with an ominous door: the only door. Picking myself up, I moved through a long corridor littered with empty bottles, filled ashtrays, and faded photographs.  Something bad had happened here, and I was ready to find out what.  Progressing into the house, a radio is heard speaking of recent murders of entire families and the grisly detail of how the fathers carried out the acts. Really grim shit.  There seemed to be no unlocked doors in the house save one. Pushing through the exit, I found myself standing back where I started–the first corridor–but something was different.

Hey, I don’t remember turning this light o–F*** EVERYTHING

P.T. is focused on the concept of “looping”, always returning you to where you started, but changing over each loop.  Think Groundhogs Day, but instead of a Punksatony Phil, there is a screaming deformed fetus lying in disgusting bathroom sink and a menacing apparition of a woman to keep returning to. The first jump scare told me nothing of just what I was to experience as the world twisted and decayed around me.  I won’t share just what takes place in the haunted halls of P.T., but I will say it is something to experience if you have the spine.

The real mystery of P.T. may just be how it plays. With no control layout, and no tutorial telling you button prompts or just what to do to progress the scenario and solve puzzles, it can be frustrating. Discovering the answers to the riddles and figuring out the nuances make for a classic feel, but later it can seem tedious as you search for tiny, nearly invisible scraps of photo, or discover the meaning of words scrawled across the wall.  Several people have shared different accounts of how they achieved completing P.T. and it seems to create a new experience for everyone.  Some say that you need to be streaming online to achieve the end, or wear headphones and act panicked and scream into the microphone.  I’m not quite sure what to believe, which really ups the ante on just what P.T. was able to achieve.

There’s a lot of this online now

Near the end, I broke down and looked up some hints to help me out. I recommend hints only as a last resort, and if this style of gameplay and setting isn’t your thing, I suggest watching a video, or simply looking up the end trailer that unveils the truth behind what P.T. is.

Hint: It’s not the Matrix

P.T. is the next title in the infamous Silent Hill series, and the names tied to this successor makes it my most anticipated game of the future. The excitement behind this stems from the visionary director Guillermo Del Torro (Pan’s Labyrinth, Pacific Rim, Hellboy) and director/creator Hideo Kojima (Metal Gear Solid) taking the helm and collaborating to create what will certainly be an amazing experience. With the pedigree of Del Toro and his films, the strange and terrifying comes naturally and at great standard. With Hideo Kojima, his famed and respected, Metal Gear franchise, shows off his understanding of games mechanics and creation.

Hideo’s ability to place strange quirks and games mechanics into all of his titles really shined in P.T. and only makes me wonder what he can create for the new Silent Hill. The last reveal in the trailer is the lead character is to be played by none other than Norman Reedus, everyone’s favorite redneck on The Walking Dead. Let’s hope that with such a strong team behind the rebirth of such a beloved franchise, Silent Hill will have it’s return to glory. I know I’m ready to be scared.