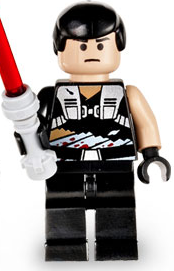 Don’t get me wrong. I love Lego Star Wars. I think the LEGO series of games have been stellar almost every time. But I want a Star Wars game that was made for adults.

I’m not saying an adult can’t love Disney Infinite 3.0, or that we need to ignore the younger audience when crafting these tales. The Star Wars universe is big enough for people of all ages to find something they enjoy. Take for instance the last installment from The Old Republic.

That was already a better story than all three prequels and bits from The Force Awakens.

However, the actual game looks like The Clone Wars had a baby with a Telltale character.

In a day and age when games can look near photo-realistic, why are we accepting a Star Wars saga that is less than that?

The Force Unleashed may not have been a perfect series, but it was a story for a more mature audience. There was love, loss, and the power of vengeance as a driving motivator. Galen Marek wasn’t a hero that changed the course of the galaxy, but he was a strong foil at the opening stages of the Rebellion. I for one wish that we could give it one more go, on the latest generation of hardware, to see just how good a game we could make. There’s still time, Disney.

Unleash this IP. Search your feelings…you know it to be a fiscally responsible move.