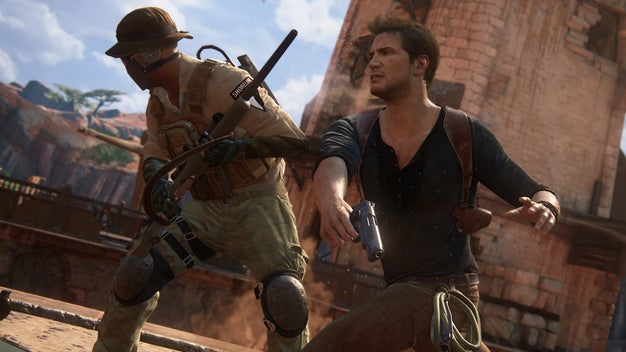 As a third-person shooter, Uncharted borrowed the tried-and-true cover mechanics from other games and almost perfected them. The same is true in Uncharted 4, with limited exception. Sometimes Nathan will jump to the wrong cover, and some objects don’t provide the protection they should, but the shooting is still an improvement over previous entries in the series.

More importantly is the ability to shoot at all. Throughout the three existing games, Nathan has been a bit of a mass murderer. We’ve talked about this in other articles, but I think it must be repeated. Our heroes in modern video games tend to kill a shocking number of people by the end of the story. It takes a little of that moral high ground away when there is more blood on our hands than the villain’s. In Uncharted 4, the developer gives the player a better choice. In keeping with Nathan’s reserved outlook on life, players can stealth their way through most sections of the game. It is more difficult, but ultimately more rewarding. I know that killing has become almost a requirement in games today, but I contest that I enjoyed allowing the enemy to live more in this story. It spoke of the Nathan I wanted to know, a man who had enough death and destruction in his lifetime, a man who wanted to leave the world a better place. This option should be made available in more titles. Think about MGS V, which actively rewarded players for avoiding enemies, or at least not killing them. It adds to the challenge without artificial means (I’m looking at you, bullet-sponges from The Division).